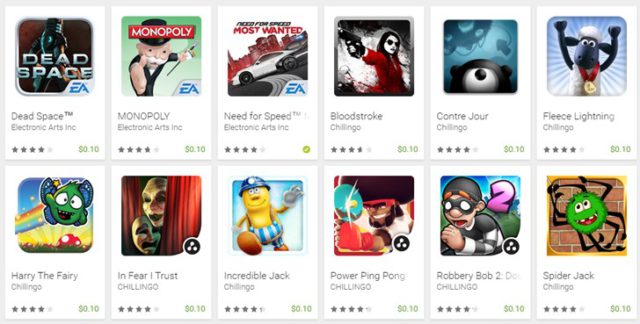 The Google Play Store just unveiled something massive! Well, not that big actually, but regardless its big enough that we had to share it with you. Electronic Arts and its mobile branch Chillingo, will be granting you a list of mobile games that you can buy from the Google Play Store for just $.10 cents a piece. Yes you read that right, 10 cents to own an EA worthy game. EA is obviously well-known but Chillingo isn’t. Unless you’ve played its newest hit, Power Ping Pong, which has been quite trendy on iOS devices lately. Other games that were provided for the same price, just might spark your interest are:

*Note: EA has announced that it’s ending support for a large amount of its mobile games, including Dead Space. 10 cents is still a pretty great deal for a port of a well-regarded console game, but it’s worth keeping in mind that there’s no guarantee that the game will continue to work.Android Police

During your mobile game hoarding session, you may find that some games are not available or just not supported for your particular device. I came across Monopoly not being supported for my LG G Flex 2 on Lollipop 5.1.1. So I think its safe to say that some of these games are literally on their last hurrah before they get removed. There is no telling how long this sale will be available for (I’m guessing a week or so), but I wouldn’t want to wait a day longer to catch these deals. And per Android Police, availability of this sale is sadly limited to just North & South American countries.

So hurry, jup on this deal. What are you waiting for?