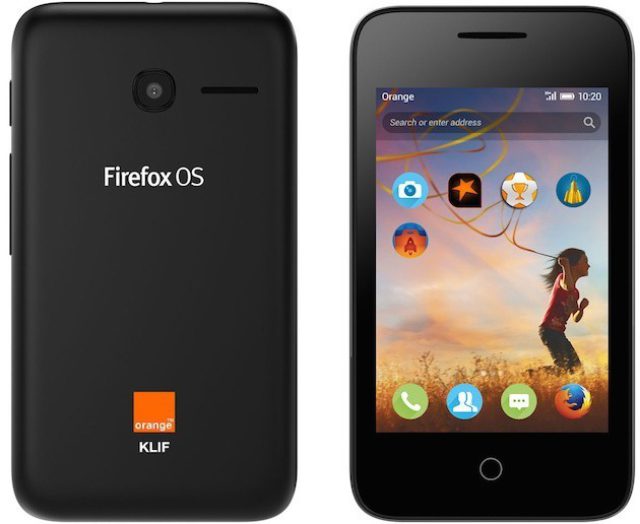 Remember Firefox OS? Yeah it feels like a long time ago when Mozilla decided to unveil their official Mozilla Firefox OS smartphone. Now they are back for a second try, but this time they are heading towards a much newer market – Africa. African smartphone markets are the new targets for many smartphone developers. While you won’t find many popular brands there, mid-range and low-range devices are getting ready to flood this area. Hopefully some brands will get lucky enough to find plenty of value in Africa. Mozilla Firefox and Orange (a French telecom) have teamed up together in Senegal and Madagascar to launch the Orange Klif smartphone (aka Alcatel OneTouch Orange Klif). Other Countries in Africa like Egypt, Tunisia, Cameroon, Botswana, Mali, The Ivory Coast, Niger, Kenya and Mauritius are expected to get the device too.

Orange Klif is a 3G smartphone that brings the internet to those rare places where you can’t online. The Orange Klif smartphone sports a 3.5-inch (320 x 480 pixels) HVGA display, a dual-core processor (1.0GHz), 256MB of RAM and 512MB of internal storage. Even a microSD card slot for storage expansion (up to 32GB) is attached. Other specs like a 2MP rear camera with LED flash, GPS, Dual SIM, 3G+ (HSPA+), FM Radio and runs on a 1300mAh battery. And of course it will be running on Mozilla Firefox OS v2.0.

“We are pleased to partner with Orange to bring the mobile Web to users in a substantial number of new growth markets across Africa and the Middle East.” “I’m also thrilled to see how the imminent arrival of Firefox OS has created excitement in the local Mozilla communities.”Andreas Gal, CTO of Mozilla

The Orange Klif smartphone  by Mozilla Firefox is exclusive to Orange mobile networks but is actually developed by Alcatel OneTouch. The company would be providing users with data, text and voice calls for a price starting at under $40, except in places like Nigeria.