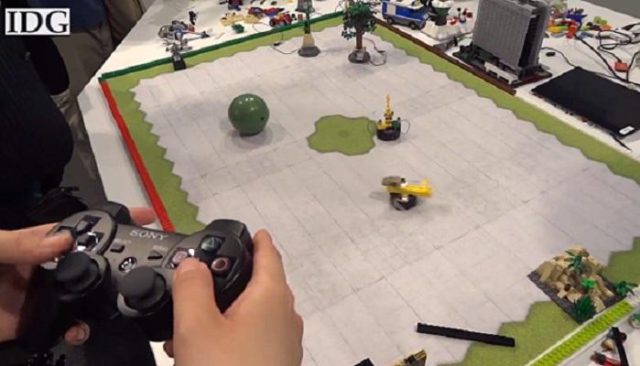 I bet you saw that one coming!

Almost 80 years of experience in interlocking bricks and 67 years of history in the electronic market join forces to create a new generation of  toys:  Toy Alive. This prototype project of Lego and Sony was presented during the 25th anniversary open house for Sony’s Computer Science Laboratories in Japan.

The Toy Alive is a small set of bricks and figures that can be controlled by a computer, tablet or through the PlayStation DualShock controller.  The whole idea is to provide interactivity like a video game to the traditional Lego figures.  To achieve this, the bricks and figures contain different chips and actuators (motors) inside.

Although this project is still in a prototype phase this is not the first advance of Lego in the interactivity market.  The first generation of Lego alive toys – so to speak – was the Mindstorms series specifically developed for programmers and students.  But this new generation of toys is aiming children.  Keeping the pieces small and simple is one of the purposes of the companies so that they can be used with other toys.

And this is the part where imagination comes to live: bricks on fire and Lego models that explode?  Why not? Actuators, translucent red bricks and built-in, computer-controlled LEDs will take care of that!  So when a kid shouts “the bricks are on fire”… well, they probably will be!  But don’t panic, it will only be a matter of “special effects“.

In this video you can see a demonstration of the “interaction” between the Legos and the Sony controller:

Bringing toys to life!  Isn’t that a dream come true for kids all ages?  I’d like to include myself as I believe I am, still sometimes, a kid at heart.