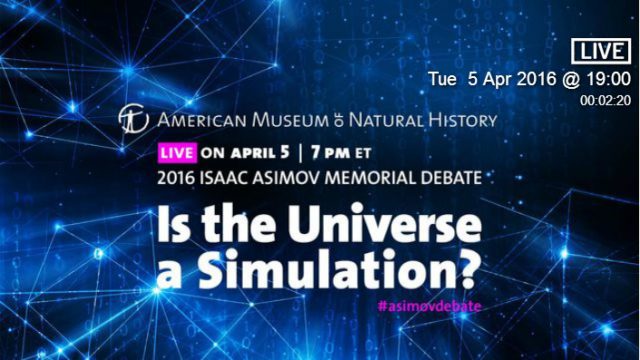 It’s been discussed for a while that the universe that we live in, just might as well be a computer simulation. At first, it was deemed speculative (as usual) but as of late it is being received as a theoretical-experimental investigation that is worthy of further exploration.

Tonight at 7PM EST (6PM Central) Neil deGrasse Tyson and 5 other panelists will join together at the 2016 Isaac Asimov Memorial Debate at the American Museum of Natural History. Together they will discuss and debate the merits and obvious shortcomings of the revolutionary and provocative theory. The event is currently sold out but feel free to tune in here on TechMyMoney because we have the exclusive livestream for you.

*UPDATE – Here is the recorded live stream if you missed it.