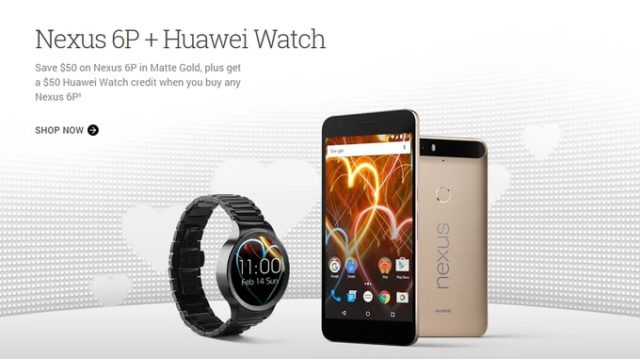 Earlier this month Google dropped the price of the Nexus 5X, Nexus lovers will be pleased to know that Google just slashed the price again as part of their Valentines Day promotion. The limited Valentines Day promotion brings down the price of the Nexus 5X by another $50, you can now buy an unlocked 16GB Nexus 5X for $299 or a 32GB model for $349. It seems like this isn’t just a USA promotion as the European prices have been dropped too. As for the larger Nexus 6P, you’ll also get a $50 price cut if you buy the new matte gold version ($449 for the 32GB unit and $499 for double the storage). If for some reason you don’t like the matte gold version, Google is also offering a $50 credit towards any future purchase of a Huawei Watch if you buy the 6P in any color. The Google Valentines Day promotion deals are limited-time offers in place through February 14th. For sure, the Nexus 5X or Nexus 6p will make a perfect Valentine gift for your significant other that’s into the undiluted Android experience.