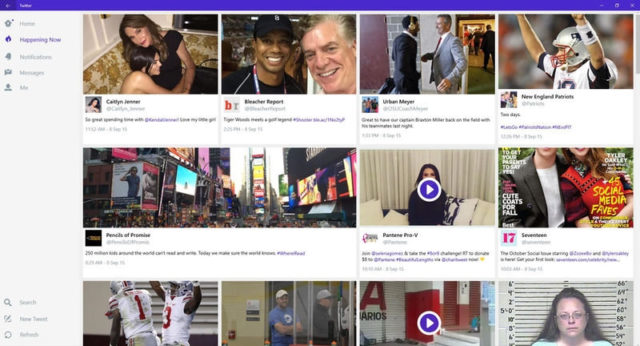 Twitter for Windows 10 just updated again, and this time they’ve added the ability to quote tweets (which came to the web and mobile versions 5 years ago) and a “Happening Now” feature that showcases popular Twitter stories in a grid view. Although some stories won’t interest you, they are trending on Twitter. With the Happening Now feature addition, you’ll find Search down near the New Tweet and Refresh section. Other features like multiple account support and lists are also available. It’s also rumored that the images are now in Higher Resolution.

But Windows 10 mobile users won’t be able to get access to this update yet because the OS is still in beta form. Once the OS launches officially, Microsoft claims that the mobile & desktop Windows 10 OS will make apps like Twitter and others “universal” so that the same versions can run on all Windows 10 platforms.