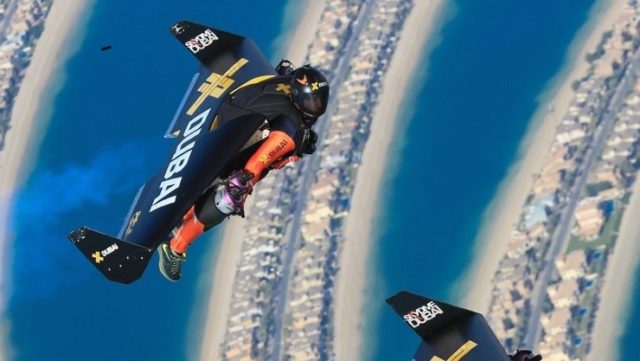 Move over skydivers and wing suit guys, jetpacks will soon be a thrill seekers favourite thing to do. Ever wondered what it would feel like to strap on a Jetpack, jump off a plane from high altitudes and then soar above Dubai’s urban landscape? Well, Yves Rossy (aka Jetman) and “protégé” Vince Reffet had the opportunity to fly around Dubai with their Jetpacks. Yves Rossy (aka Jetman) has been doing this (with his jet-powered wing) for over six years now. He’s been on TED talks, national geographic, and his crossing of the English channel and strait of Gibraltar were highly televised and reported on. I think I’ve watched this video six times already and I still can’t get enough of it.

What these people do is absolutely insane. And insanely cool. Absolutely insanely cool. If you had no idea jetpacks have reached such levels of perfection, well, stop hiding under a rock. This video is incredible and so beautiful to watch, it made me shed some geeky tears knowing that humans know no boundaries. Looks deceptively easy to do. The tricks they performed here has clearly taken a lot of time to perfect to that level of skill, so don’t wake up one morning and try it at home. Did I forget to mention that both guys performed a loop-the-loop next to the Burj Khalifa tower? The new guy that paired with Yves Rossi “Jetman” for the Dubai jetpack flyover is Vince Reffet, a skydiver who once base jumped off the Burj Khalifa. The video had me wondering what our special ops guys could do with this jetpack.  No need for further spoilers, enjoy the video and let us know what you think.