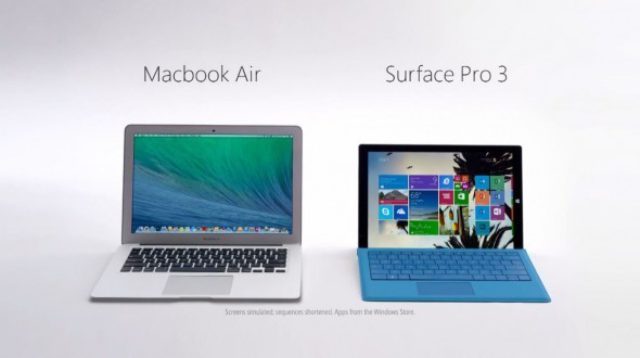 Microsoft launched three new ads for the Surface Pro 3 today, targeting Apple’s MacBook Air in every possible angle you can think of. You can’t blame them for the cheap shots, even Apple takes shots at Microsoft from time to time. The ad is a giant leap from Microsoft’s usual comparison of its lineup of Surface tablets to Apple’s industry leading iPad. The three commercials are focused on showing you how much better the Surface Pro 3 tablet/laptop hybrid is, and takes a direct aim at Apple’s ultra-light laptop, the MacBook Air. The new ads appeared yesterday on Microsoft’s Surface YouTube channel titled “Crowded, Head to Head, and Power.” I personally doubt many Apple lovers will be rushing to trade in their laptop for a Surface Pro 3, as Apple product users are really hardcore fans (camp outside for day for new apple products, cry when watching new Apple product launch.) All this will bring about is more Apple and Microsoft’s fan boys wars on social media as usual. The “Crowed” video will surely get some chuckle or two out of you, enjoy the videos after the break