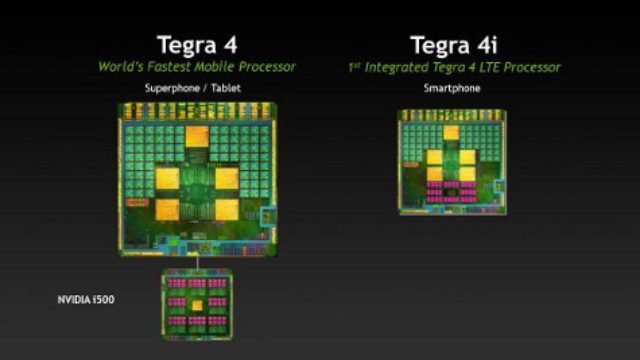 NVIDIA introduced today, the first integrated Tegra LTE Processor, “Tegra 4i”. The Tegra 4i is smaller than the Tegra 4 but packs a good punch and significant performance. Combining the Tegra 4 with the i500 modem in a chip, Tegra 4i will be capable of powering major functions in your phone, provide amazing computing power and longer battery life.
With the capability of powering major functions of a smartphone, the formally codenamed “Project Grey” processor is packed with “60 custom NVIDIA GPU cores; a quad-core CPU based on ARM’s newest and most efficient core — the Cortex-A9 r4 CPU — plus a fifth battery saver core; and a version of the NVIDIA i500 LTE modem optimized for integration.”