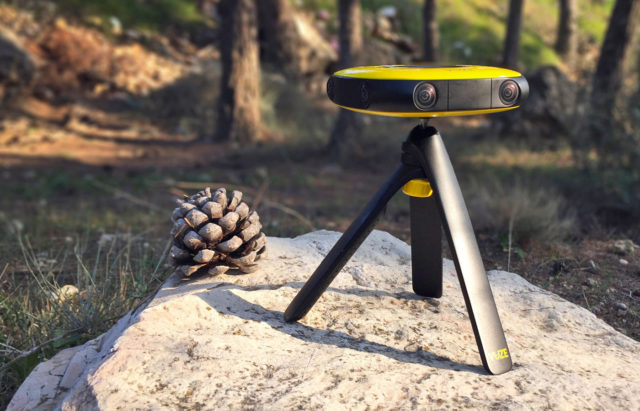 If you’ve ever tried to buy or look up the prize of a 360-degree camera you’d be surprised at the outrageous price tags you’ll find. Well, I guess the guys from HumanEyes technologies have been listing to consumers, thanks to their way more affordable $799 Vuze 3D 360-degree camera. Priced under $1000, the company hit their target mark they set back in January. Compared to other 360-degree cameras out there that only shoot in 2D and even GoPro’s upcoming Omni rig, the Vuze Virtual Reality 3D 360-degree camera is the most inexpensive of the bunch. If you are looking to add one to your videography arsenal, you will have to wait until fall to get your hands on one.

The  Vuze Virtual Reality 3D 360-degree camera comes with eight cameras that allow you to record in 3D or 2D at a higher resolution. The total number of cameras on Vuze’s system eliminates the need for fisheye lenses. The cameras use lenses that capture 1200 horizontal FOV and 1800 vertical FOV that together generate 4K 360 VR content. Since the VUZE camera can easily generate 3D and 2D content, the company explains that “it is like having two cameras in one. Its 8 FHD cameras deliver one of the highest quality 2D content experiences on the market and greatly reduce the effects of flare and peripheral distortion associated with ultra-wide fisheye lenses.” The Vuze 3D 360-degree camera is currently up for pre-order from the company’s site, see the source link below for more info.