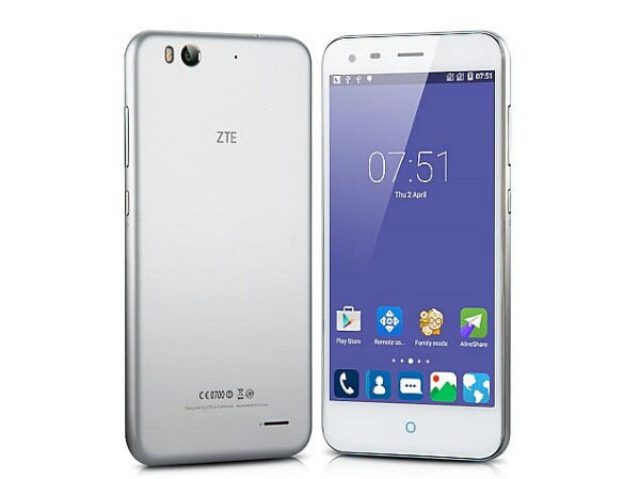 ZTE has just announced their global launch and distribution of the ZTE Blade S6 Plus smartphone. The ZTE Blade S6 Plus will be available exclusively from eBay only and pricing ($299.99) will depend on the location where the device is being shipped, such as £199.99 UK and £276.99 for the rest of Europe.

“We are very excited to announce with eBay the global availability of the ZTE Blade S6 Plus. Following the successful launch of the Blade S6, we are now offering our consumers a larger-screen alternative to a device that combines high-end performance and quality at a very competitive price tag.”

The ZTE Blade S6 Plus comes with a 5.5-inch (1280 X 720 pixels) HD JDI display with in-cell technology. It is powered by an octa-core Qualcomm snapdragon 615 processor with 2GB of RAM and 16GB of internal storage. There is also microSD card storage expansion supported.

The rear main camera on the ZTE Blade S6 Plus is a 13MP Autofocus camera with Sony IMX214 sensor and LED flash. The front facing selfie shooter comes with 5MP. The ZTE Blade S6 Plus comes powered by a 3000mAh battery, it supports Dual-SIM functionality, 4G LTE, and runs on Android Lollipop 5.0.2 out of-the-box, with the company’s MiFavour 3.0 UI on top.

SHANGHAI–(BUSINESS WIRE)–ZTE, a leading global mobile device maker, today announced the worldwide debut of the ZTE Blade S6 Plus on eBay. The affordable premium phablet can now be purchased by consumers across the globe via eBay, priced at USD $299.99 (£199.99 and €276.99 for the United Kingdom and Europe respectively).

“We are very excited to announce with eBay the global availability of the ZTE Blade S6 Plus,” said Adam Zeng, CEO of ZTE Mobile Devices. “Following the successful launch of the Blade S6, we are now offering our consumers a larger-screen alternative to a device that combines high-end performance and quality at a very competitive price tag.”

The Blade S6 Plus was first showcased at the Mobile World Congress 2015 in Barcelona, alongside the 5-inch Blade S6, which was launched earlier in January 2015. Similar to the Blade S6, the Blade S6 Plus is powered by the same Qualcomm® Snapdragon™ 615 octa-core chipset and Adreno 405 image processor, and runs on Android 5.0 Lollipop with ZTE’s customizable MiFavor 3.0 user interface. The Blade S6 Plus boasts a larger JDI Super Screen 5.5-inch HD display with In-Cell technology for better and more vibrant image quality, as well a higher-capacity 3000mAh battery.

Also unique to the Blade S6 Plus is an innovative function that allows the device to double as an infra-red remote control. Compatible with all major electronic and household appliance brands, the function allows Blade S6 Plus users to control televisions, set-top boxes, air conditioning units, DSLRs, and more. It is simple and easy to use, and saves users the hassle of switching between several different remote controls.

“We are thrilled that ZTE has again decided to debut their latest device on eBay,” said John Lin, Managing Director of eBay Greater China. “Through our global marketplaces, we will partner with ZTE to introduce their excellent products to our 155 million customers worldwide.”