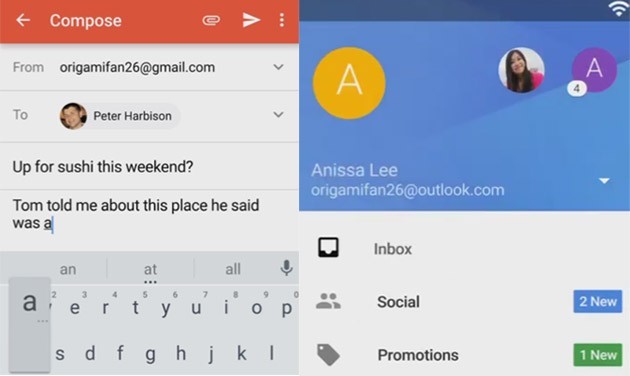 With Android Lollipop in the horizon, Google’s been updating stock Android apps with its new material design. A recent leaked video by Android Police shows that Gmail’s the latest app to get some visual makeup from Google. The Gmail 5.0 dose not only come with a Material Design update, the new Gmail 5.0 will be able to support email accounts from other providers like Yahoo or Outlook. A tweet from Matt Jones also confirms that the new Gmail 5.0 will support IMAP, POP & Exchange accounts, as seen in the Android mail client.

@tomwarren it does IMAP, POP & Exchange, not just those mentioned in the video http://t.co/j2iuEoQ9hm pic.twitter.com/JciJF7G0S3

You can head on to Droid-Life website for images of the new Google Play Music app taken from a Nexus 4 ROM. The Google Gmail 5.0 app is not available now, with the Nexus 9 and 6 around the corner, I bet we’ll soon get a functional APK floating around. See the video below to get an actual feel of Google’s new Gmail app.